QUINLAN: Come on, read my future for me.

TANYA: You haven’t got any.

QUINLAN: Hmm? What do you mean?

TANYA: Your future’s all used up.

Touch of Evil contains a single-take tracking shot of such elegance and skill that it may one day come to be seen as the ultimate expression of Orson Welles’s filmmaking prowess. See if you can spot it—it appears 34 minutes into the film.

It occurs in the apartment of young Manolo Sanchez, the chief suspect in the bombing of an American diplomat in a Mexican border town. It features, inter alia, Sanchez himself (Victor Millan), local police chief Hank Quinlan (Welles) and Mexican narcotics officer Miguel “Mike” Vargas (Charlton Heston). Observe how Russell Metty’s camera, pinned in short focus, drifts slowly from the front room to the bathroom and back again twice, making sure to verify that there is no-one else in the apartment and no way in or out save for the front door—how it lingers on the empty shoebox Vargas replaces on the shelf, a shoebox which will later be found to contain two sticks of dynamite. This is the long take as a narrative device, establishing a set of circumstances so that the central misfeasance of the film (the planting of evidence by Quinlan to frame Sanchez) can occur, and simultaneously exposing a tense, bilingual interrogation sequence as Vargas tries vainly to mitigate Quinlan’s aggression towards the boy. It has the intellectual power and emotional intensity that only writing and camerawork of such subtlety can provide—and in its single take, the restitution of the entirety of the action within its own space and time. The scene is all the more applaudable because it was filmed in the presence of a tetchy Universal executive, who had been dispatched by a panicked studio to find out why, by 7 p.m. on the first day of shooting, after ten hours spent only on rehearsals, Welles hadn’t shot an inch of film. By the time this scene had wrapped, just over five minutes later, he had three days worth of finished footage in the can.

By 1957, Welles already had a strong inkling the game was pretty much up for him in Hollywood. Having returned to the U.S. after a long European sojourn, and between small roles in inferior films (The Long Hot Summer, Pay the Devil) and some TV Shakespeare, he had been cast as the lead in what seemed an unprepossessing potboiler based on Whit Masterson’s pulp book Badge of Evil (a book, which despite the mythology, Welles found “not that bad”). At Heston’s instigation Welles agreed to rewrite and direct the picture for no additional fee. Like so many of his previous films (The Magnificent Ambersons, It’s All True, Mr. Arkadin) it was ultimately taken away from him and “finished by others.” Welles made a celebrated fuss on principle at the time, writing a 58-page memo to the studio demanding detailed restitution of specific elements of the sound, editing changes, etc, which was so extensive that it was later used by Walter Murch in the film’s refurbishment in 1998 (giving birth to the print being shown by the Museum of the Moving Image). Yet, despite these public protestations, Welles was in fact more resigned than ever before to losing control of the project. In the end he was broadly content with the resulting film and was even impressed with the Henry Mancini score the studio had tacked on. Murch’s version successfully restored Welles’s original intentions for the introduction (overlapping sounds of jazz music coming from each doorway the camera passes; no titles), but could not rematerialize lost footage, nor excise the two scenes between Vargas and his wife (Janet Leigh) that by their flatness, were palpably shot after the event without Welles’s supervision. In any case, none of these aberrations would do any lasting damage—we’re far from the farrago of Ambersons.

In Quinlan, the local folk hero, a policeman with an enviable conviction rate, Welles created one of the great noir heavies: a pachydermic, alcoholic, tyrannical racist brute who resorts to blackmail and murder to prop up his track record. The common comparisons—to Falstaff and even Gargantua—ignore the character’s utter lack of joie de vivre. To imbue a character as odious as this with tragic sympathy is Welles’s playful way. Like with Touch of Evil itself, people tend to forget that Quinlan is seriously nasty—a personification of physical and moral decay. Yet when visiting his old flame, Tanya (an uncontracted Marlene Dietrich, filmed for the most part on a closed set to avoid the studio finding out lest they panic about her salary demands, and lit as if in tribute to Josef von Sternberg), Quinlan melts and flirts, hinting at a past that might have promised more. “I didn’t recognize you,” Tanya says. “You should lay off those candy bars.” Welles exaggerates Quinlan’s deformity still further by having him speak barely coherently—a wildly unsympathetic, yet magnetic performance. Welles was only 42 when he played him, retaining since Citizen Kane his desire as an actor to represent ageing and degradation on screen. Despite the director’s oft-declared distaste for what Quinlan stood for, Welles’s film feels at times (especially in the final revelation that Sanchez was guilty) like a downbeat tribute to an artist whose magic has worn off.

The downright humorous number of similarities between Touch of Evil and Hitchcock’s Psycho, released two years later (opening crane/dolly shots; the heavy as the lead; a feisty yet vulnerable Janet Leigh alone and terrorized in a motel run by a nervous madman; art direction—detailed interiors and use of taxidermy—by Robert Clatworthy on both films; the use of natural lighting for outdoor scenes—Touch of Evil’s camera operator John Russell would turn DP for Psycho; Grandi’s death-head lit by a neon flashing light vs. Mrs. Bates’s decomposing skull lit by a swinging bulb) serve only to emphasize the real stylistic differences between Welles and Hitchcock. Touch of Evil’s justly celebrated opening crane shot contains what would become hallmarks of Hitch (especially the proximity of the bomb to the newlywed protagonists at various junctures without our knowing how far the timer has clicked down) but piles on top of this Welles’s flair for light, sound and humor—and above all allows the camera to retreat from the action, to ebb and flow naturally, not to fix itself on the key subjects of the scene with impunity. (Hitchcock would eventually come up with his most Wellesian flourish in the slow, chaste retreat from the rape victim’s apartment in Frenzy).

You can see the camera in Touch of Evil as a character in its own right, fitting for a film where the movement of bodies defines the personalities which inhabit them: Quinlan limps sloppily, creating movement only by the rotation of people around him; small-town hood “Uncle” Joe Grandi (Welles regular Akim Tamiroff) skips and capers like a clown; Vargas strolls at first with Heston’s standard hard man gait (complete with the coolest sunglasses that side of Jean-Louis Trintignant’s in Z) but ends up staggering, his body twisted into curious shapes, as he loses control of his emotions and embraces his own corruption; Dennis Weaver’s night porter bobs unsettlingly, like a restless flightless bird. The camera, for its part, glides and weaves around the other characters, occasionally hiding, spying, retreating behind walls and under porticos—like a silent witness to the sleaze and the dirty deals, but always, inexorably returning to the scene of the crime: the street. In this way the film delivers a powerful sense of location, which as the plot plays out to the end and we are transported past the oil derricks (lining the road like trees) to the bridge over a river full of detritus, remains one of the most intoxicating and resonant elements of Touch of Evil on the big screen. Venice, California stands in for Los Robles.

As always with Orson Welles, we are never far from Shakespeare. Not just in the recognizable motifs (the washing of blood from Quinlan’s hands, Dennis Weaver’s fool/porter at the Mirador motel, Janet Leigh as Macduff’s wife visited by a gang in the dead of night) but also in the sweeping moralism (the battle between law and justice), the layers of maleficence (Quinlan > Grandi > Sanchez) and the ultimate theater of betrayal and death. Was there ever a more tragic character in fact, in all film noir, than Pete Menzies (played by Joseph Calleia), the loveable, slightly dim-witted acolyte who hero-worships Quinlan, colludes with him, defends him, finally decides to turn him in, then ends up killing him? Calleia’s performance, by modern standards, outstrips even Welles’s in its naturalistic poignancy—framed at one stage by the bars in the prison corridor, repelled by the spectacle of what Grandi’s hoods did to Vargas’s wife, he provides the film’s beating heart, one soul in that godforsaken place which might have been worth saving.

If this satirical tragedy, marketed by Universal as a piece of exploitative trash and released in a double bill, is primarily about anything in particular, it’s the morality of breaking the law in order to deliver justice. When Quinlan snaps at Vargas that “a policeman’s job is hard enough,” Vargas responds “it’s supposed to be—a policeman’s job is only easy in a police state. That’s the whole point captain, who’s the boss—the cop or the law?” Quinlan on the other hand would seek to claim, like Raskolnikov in Crime and Punishment, that he can “march over corpses or wade through blood to do what’s right,” a view seemingly endorsed a decade or so later by Clint Eastwood in Dirty Harry. Such a standpoint, left partly ambiguous by his romantic treatment of Quinlan’s betrayal and death, earned Welles a brief reputation as a fascist (which he jokingly ascribed to the Cahiers du cinéma being full of fascists—and they had meant it as a compliment). You might prefer to see in Quinlan’s fate, narrated over Vargas’s short wave radio in the final set piece, the awful culmination of a long struggle for recognition and respect. Welles never made another film for a Hollywood studio—his own struggle continued to the very end. But he was some kind of a man. 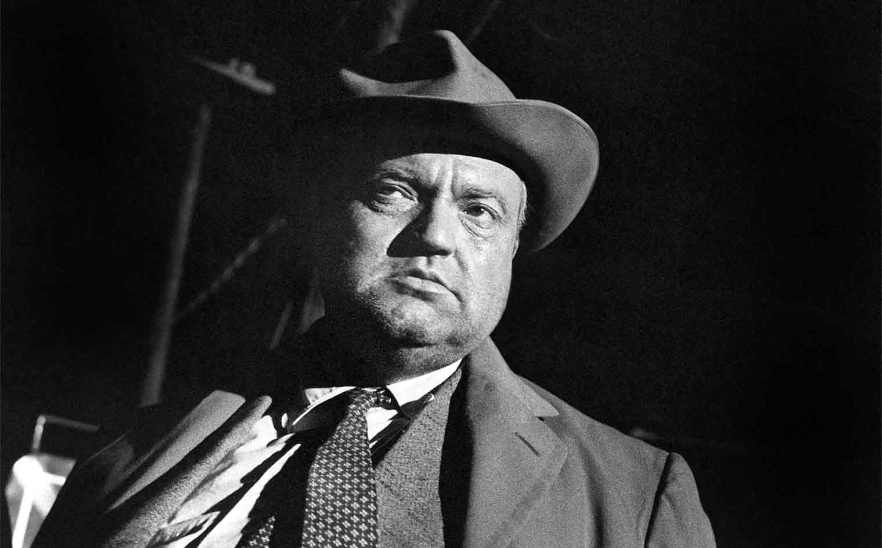 This article was first published in Moving Image Source on March 16, 2012